It seems the only traffic my site gets anymore is when I post a video of my lip syncing to songs I like. Unfortunately, I haven’t had the time (or much energy) to make any new videos in the last few weeks. Sorry.

School. The legislative session. Trying to wrangle supporters for a fight on a $15 minimum wage for Hawaii. The Kuleana Academy. All these efforts have sucked up so much of my energy, that there’s little left. I’m working to increase my efficiency and time management, but adjustments to my routine are slow to come; I’m a creature of habit. So, until that happens, not only can I not promise regular posts, but I can’t promise regular videos, either.

Still, it’s (mostly) for my intellectual and career betterment, so I hope you’ll understand.

I’ve got a few minutes while my phone and iPad update their software, so I thought I’d share with you a recent assignment I completed. It’s a mock speech I wrote for Donald Trump. This past week in class, we studied the construction of speeches and how people make (political) decisions. The lesson’s final assignment was to write a speech, using polling data from 2015 and the lessons we learned to write a speech for either Donald Trump or Hillary Clinton.

At first, I thought writing a speech for Trump would make my skin crawl and my guts and progressive instincts would revolt if I attempt a speech for the cheeto man. But after thinking about it, I thought it would not only be easier (less wonky) and could actually be kinda fun. And so it was.

Hopefully, it will tickle you as much to read it as it did for me to write it:

Over the past eight years, crime has risen, violence against Americans around the world has risen, the cost of health care has risen, our economy has stagnated, and good jobs have been hard to find. These are all bad things and all are the product of a President and a Congress that has failed too many ordinary, hard-working Americans.

But Wall Street has done gangbusters. They have done terrific while everyday people, ordinary Americans like you good folks here today, have fallen behind. You have struggled. You have lost jobs. And you have lost faith and hope in the America we all love. I love this country!

The politicians in Washington have done nothing. Nothing! They are all talk. When they come home to tell you what they’re doing, what they are going to do to make your lives better, they say all sorts of things. They make promises and do not keep them. When I am elected President of the United States of America, my first order of business, on day one, will be to make sure government is working for the people, not Wall Street and the corporate lobbyists.

You know, I saw a poll the other day. I Pew poll, I think it was. This poll said half of all Americans feel like they are falling behind. Half! And the other half? Well, they are doing ok, but most of them do not see things getting any better for themselves or for their families. If you are not making hundreds of thousands of dollars a year, and most of you are not, you are struggling. Your families and your friends are struggling.

This same poll, the Pew poll, found that more than eighty percent of you who are making less than one hundred thousand dollars a year, view the economy as poor.

Too many of you believe there aren’t enough good paying jobs. How can this be in the country with the greatest economy in the world? Well, I will tell you. Those good jobs are being given to illegal immigrants. People are crossing our borders, entering our country illegally and taking good jobs from folks like you.

For the greatest country in the history of the world, this is unacceptable. What happened? How did we come to this?

For starters, this country has been taken over by status quo politicians. Lobbyists and banks have rigged the system for themselves. The Washington establishment and Wall Street elites have forgotten about you and have utterly ignored the cries and the needs of good, hard working ordinary Americans. All of you here today because you are being left behind by a system and by leaders who don’t care about you.

The Democrats’ front-runner Hillary Clinton, says America never stopped being great. She says America has always been great. Wow, is she wrong. She is so wrong! She is the queen of the Washington elite. She is bought and paid for by Wall Street and the big banks and she is so out of touch with ordinary Americans. Even Democrats aren’t thrilled with the economic prospects of the country; only about one quarter of them think the economy will improve in the next year.

But I am not like Hillary. I am not a career politician intent on maintaining the status quo. I am not a high-paid Wall Street lobbyist looking out for the interests of my clients. I am not a member of the political establishment. I am a political outsider.

How can we fix everything that is wrong with our country? How make this country great again?

First, I will start by getting the government out of the pockets of ordinary Americans. Your taxes are too high! And how does the political establishment in Washington spend those hard-earned dollars? They spend them by sending money around the world to help people you have never met in countries you have never heard of. They use your tax dollars to subsidize banks and corporations; the wealthiest among us. I should know. I pay so little in taxes it is unbelievable! This has to change.

As President, I will make sure the government is working for ordinary people. Government will stop taxing to death people like you, people who work hard to support their families.

Second, as President I will make sure good paying jobs stop getting taken by illegal immigrants. We need to put a stop to this right away, but the Washington establishment has done nothing about it. They triangulate, they posture, and they compromise. They worry about how they will be perceived by pollsters and by people around the world. They are more concerned about politics than about doing what is necessary to help Americans now. When I am elected President, I will see to it that our borders are secure and that jobs right here in America are going to hard working citizens!

It is true, too, that too many American jobs are being sent overseas. We are losing too many jobs to places like China. The Chinese are laughing at us. American businesses, tired of wages that are too high and government regulations that are too stringent, are sending their manufacturing jobs, their call center jobs, and even their high-tech jobs to countries all over the world. All the while, the career politicians, the Washington establishment talk to us about free trade and globalization.

And everyone is talking about the minimum wage being too low.

I will do all this and more to make sure Americans can work in jobs they can be proud of. Jobs that will allow them to provide for themselves, for their families. When I become President, Americans will not have to struggle just to get by. And you all will be proud of your country again.

Vote for me and I will take away this rigged government system from the Washington establishment and from Wall Street lobbyists, and giving it back to the people. I will make this country great again.

Vote for me and I will make sure America’s economy is the greatest in the world again! So, it’s been a couple of weeks since I posted anything here. I haven’t been intentionally avoiding the blog. I just haven’t had anything to write about. Combine a dash of writer’s block with the general distraction of the holiday season and it’s a good recipe for blog neglect.

Admittedly, I don’t have really anything to share at the moment, either. But two weeks is already too long to go without so much as a peep.

There’s definitely some stuff coming up that will be worth writing about. Until then, however, I thought I’d share some pictures I took a couple weeks ago at the Honolulu City Lights.

You may have seen them already on Facebook, but if not here ya go. 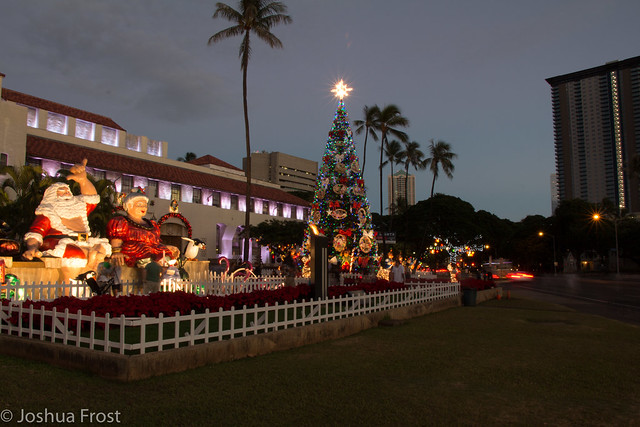 In case another post fails to materialize before the end of the year, have a happy and safe New Year.

i started writing something about online dating, but have put that aside for today.

in a previous post, i mentioned that i’m in the process of completing an application for graduate school. well, i’m struggling to write a strong “statement of purpose” essay. needing to get that finished, i’ve pushed off the intended post for another day.

if you’re interested and/or willing to take a look at my essay to critique, copyedit, etc. please let me know. i’ll likely be reaching out to at least one or two people to assist me.

as i come to the late afternoon, i’m still struggling to materialize a worthwhile post for today; i’m feeling overwhelmed.

it happens occasionally. my brain goes into overdrive on so many things at once, that it becomes hard for me to focus much on anything at all. life pressures, reminders of things i want to do, or put another way, things i haven’t done or things that are absent in my life.

over the years, i’ve learned this is a symptom, at least for me, of the mild but chronic depression (dysthymia) that i struggle with. so no real post today, instead just a list of topics, thoughts, ideas, feelings running through my head:

throwback thursday should offer me a relatively easier post, though i’ll have to find a good picture. in the meantime, the best thing for me is to keep my head down and ride out this temporary disfunction until my brain quiets down a bit.

as i’ve been bogged down in actual work today, this will be a quick post.

one. i want to invite everyone to the fifth annual laborfest.

it’s a great event, put on by good, solid progressives and supporters of economic justice concerns and organized labor. please attend if you can and spread the word.

two. in an effort to encourage more people to read my blog, i thought it might be worth asking people what they might like to see me write about. current events, politics, personal… whatever, are just some examples. of course, if the suggestion is, for me, boring or too personal, etc. i just pass it over. but maybe there are some good ideas, interesting topics that folks might want to see written about here.

i’d really appreciate any suggestions on topics you can share.