It might come as a surprise to some, but I used to have a social life. Shocking, I know. But it’s true.

I used to have a group of friends with whom I spent a lot of time. They moved away years ago to pursue their lives. Their careers. I stayed in Hawaii to pursue mine. This is from April 2008. I don’t recall who the blonde on the left is, but the other two are Katja and Macy. They were married a few years after this was taken.

Above is me, of course, and Becky. She also eventually married….

There were a few others in our little group who, for whatever reason, aren’t included in the pictures from this outing. Back then, we frequently spent our evenings together, so I don’t remember the specifics of this one. Needless to say, it looks like drinking was involved and a good time was had by all.

Here’s another post of a bunch of us from back in the day. A couple of months ago I learned my therapist is retiring. Last week I had my last session with him. Off and on for more than a decade, he has helped keep me on an even keel. Not only during the turbulent times of my life but also when its waters were calm.

When I arrived in Hawaii I was recovering from a not-so-small breakdown; one reason I moved here was to get away from a significant source of stress and heartbreak. With no plan to make Hawaii home, I came here to “sort my shit out,” which included seeking out therapy (and medication if need be). While I had been in worse shape not that long before arriving here, I was still pretty screwed up at that point.

So, before I had any job or health insurance, I saw a doctor at Leahi Hospital in Kaimuki. I only went the one time. After some testing and questioning, the doctor there was the one who diagnosed me with Dysthymia. I knew then I couldn’t be casual about finding a regular doctor, but a steady job and health insurance were both important prerequisites.

The idea of “shopping for a shrink,” as I called it, was not remotely appealing to me. So I count myself incredibly lucky that I was able to find this doctor from a referral rather than by trial and error.

In the beginning, I was singularly focused on trying to understand what the hell was wrong with me. At the time I believed that if I could understand the root causes of my mental dysfunction, I would be able to make corrections.

Eventually, my therapist convinced it that the causes mattered less than getting better. I recall I resisted a causeless approach, but I was determined to get better. So I acquiesced.

In addition to an insistence on finding root causes of my dysfunction, I was fundamentally opposed to accepting any kind of medication. At the time, though a part of me really understood what it meant to be depressed, I didn’t think I needed medication to get sorted. And again, he convinced me it was worth a try.

For better or worse, it quickly became apparent that medication wasn’t going to help with what was wrong with me. For that I needed good, ol’ fashioned talking it out.

Off and On Maintenance

That was more than ten years ago.

Eventually, I got to the point where I didn’t think therapy had anything to offer me. After years of frequent and regular sessions, it felt like I was graduating to a new life. Or, at least a new perspective.

I was happy consistently for the first time I could remember. Or at least what seemed like happiness; I was content. And so it was for years. Until the wheels came off my wagon again and I resumed appointments.

After some time, I returned to my own equilibrium, but continued what I now refer to as “maintenance therapy.” Some weeks are better than others, and the regular check-ins have done a good job keeping said equilibrium.

I’m in pretty good shape now, for the most part. I don’t claim to be “fixed.” After several small relapses and at least one big one, I’ve accepted completely both the good and bad in me. Maybe I’ll be even better in the future, but for now… I’m good.

I’ve had doctors retire and relocate on me in other areas of my life. Since being diagnosed with Crohn’s Disease, I’ve been passed along through four Gastroenterologists. While annoying, none of those changes necessitated a blog post.

My therapist, maybe as much as anyone else in my life is responsible for the person I am now. Maybe there will always be a part of me that is broken. But for the old me, for the former me that would have been enough to send me retreating to the dark corners of my brain. The now me both understands I might change and accepts if I don’t.

That may not sound like much of a revelation, but for me, it’s the difference between happiness/contentment and dysfunction.

So this retirement and changing of the doctoral guard is, for me, much more meaningful. Poignant. I am thankful for who I am now. I like me. And for being able to say that I have my therapist to thank. While an appointment to a new therapist is pending, it’s hard to imagine I will be as lucky to have another that I like and so appreciate.

Change, for me, is somewhat challenging and this change is no different. I write this to remind me of the good work I did with him. The work he did with me. And to say thanks. The last few weeks have been hectic, so I haven’t had an opportunity to record any new music videos. But, I graduated from Kuleana Academy this past weekend (I’ll be writing a separate post about that soon), so I may have a bit more flexibility in time going forward.

Today, while walking to and back from lunch, I listened to last week’s Intercepted podcast. There was a portion that talked about Reverend Martin Luther King’s speech given 50 years ago. That particular segment of the podcast was particularly interesting. Both inspiring and a bit sad. Six years ago today, I was lucky to witness first hand the four years of work come to fruition with the signing of Senate Bill 232 as Act 1 of 2011. Civil Unions had become the law in Hawaii. 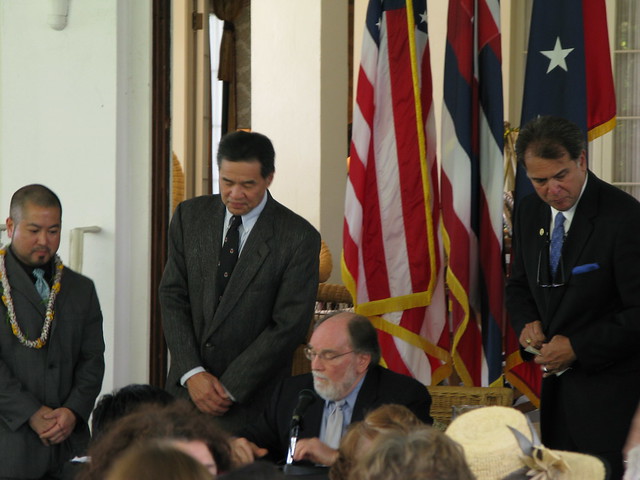 At the time, I was unemployed, but volunteering in Governor Abercrombie’s Policy Office, so I was able to attend the signing ceremony at Washington Place as Part of the Governor’s Office. I didn’t have to scramble for a ticket and was able to witness history without depriving someone else the opportunity.

It was a proud day for me and for so many others who had worked so hard to get to that point. There aren’t many things in my life of which I am more proud to have been a part.

Of course, a little less than three years later, marriage equality would become law. I was lucky to have been in attendance for that signing ceremony as well, but that’s for another time.