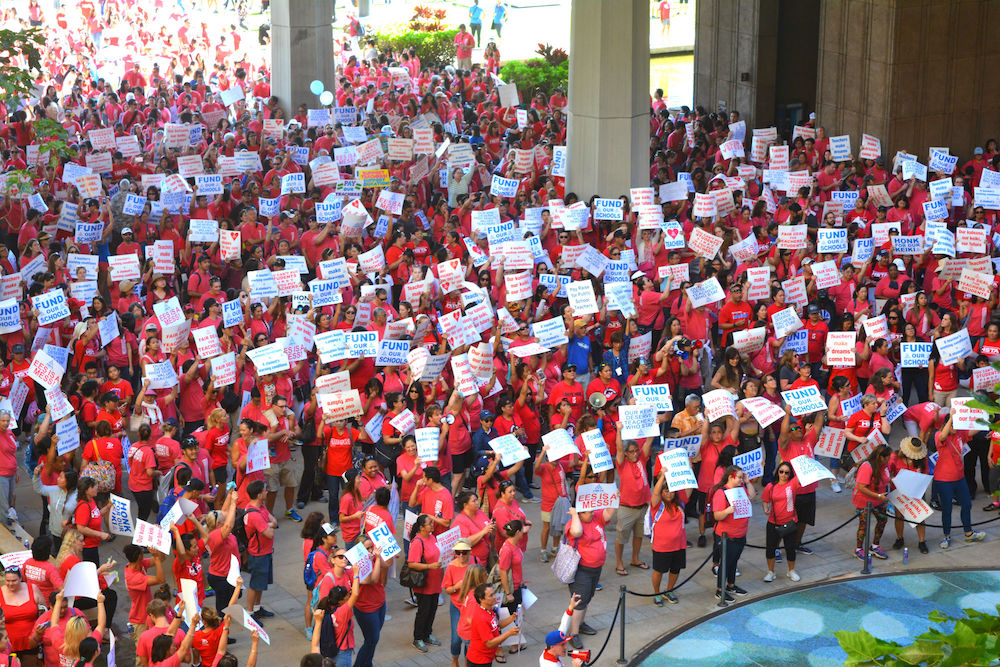 It’s been a long couple of weeks. I sit here on this Thursday morning, sipping my coffee and contemplating the 2019 legislative session. On this last day of session, I thought it would be good if I shared some of my reflections with you.

It’s a bad-news, good-news situation. And while, in my humble opinion, the bad far outweighs the good, there are shiny spots and reasons for hope.

On an almost unprecedented scale and in spectacular fashion, our elected officials failed. They failed to move the state forward on critical issues relating to climate change, public education, cost of living, homelessness, or affordable housing.

While childish quibbling and petty fighting is standard fare at the Legislature, our elected “leaders” out-did themselves. Ego-bruising and score-settling seemed to be the primary motivators this year. Well… except for outrageous efforts to further enrich the ruling elite.

House Bill 1586 was clearly a priority and appropriates $350 million for a new stadium on Oahu. But I’ll come back to this in a moment.

And as I’ve written about a couple of times (here and here), our elected officials were nearly united in their allegiance to their paymaster Alexander and Baldwin (A&B) to ensure it could continue to steal water at obscene rates and avoid a $62 million contract penalty payout. In the wake of the devastation left by the legislature’s insistence on House Bill 1326 House Draft 2 was nearly every bill tackling sea level rise climate change. So while they paid lip service to their commitment to tackling climate change and its impact in Hawaii, our leaders did little more than pose for photo ops and pat themselves on the back for their edge-nibbling efforts.

I’m also sad (though not really surprised) to say that in a legislature with a Democratic super-majority the Democratic Party of Hawaii’s legislative agenda landed with a deafening thud. Among the Party’s failed priorities was a desperately needed raise for minimum wage workers. Lacking any political will and deferring to business interests, House Bill 1191 died unceremoniously on the last day of conference. I also wrote about that effort….

Finally, in a spectacular display of guilt-tripping and arm twisting, the Senate approved a measure to tax illegal vacation rentals. Let me say that again.

The legislature approved a measure, Senate Bill 1292, which taxes illegal vacation rentals. It doesn’t stop them or in any way regulate them. It simply taxes them. So, in a shameless effort to add $42 million to the state coffers, the legislature ignored pleas from communities infected with short-term rentals and their effect on our affordable housing crisis. They ignored calls for support from county governments for help regulating them and simply grabbed $42 million.

When challenged, those Senators who supported the bill threatened funding for good stuff. Rather than list them here, I encourage you to take a look at the Civil Beat article that shines a light on their mean-spirited efforts. And nowhere, not once, was the new stadium’s $350 million mentioned as an option for closing the gap. We certainly wouldn’t want development interests to take a hit.

In a cup otherwise brimming with disappointment, there are some bright spots worthy of mention.

Bail reform and cannabis decriminalization both passed this year. Senate Bill 192 “authorizes the court to release a defendant in custody on unsecured bail.” Essentially, if you’re arrested you might be able to sign a promissory note committing you will show up for your court date, or owe the bail amount. This is a big step forward in broader criminal justice reform efforts. Bail reform was a priority for the Democratic Party of Hawaii and while it submitted testimony, I want to applaud and congratulate those who worked hard on this issue.

“Double-bucks” also passed this session. Senate Bill 390 provides “a dollar-for-dollar matching program for beneficiaries of the federal Supplemental Nutrition Assistance Program (SNAP) to purchase Hawaii-grown produce.” This is good for local farmers and good for those families who rely on SNAP for financial assistance.

And finally, the “water theft” bill (HB1326, mentioned above) appears to have gone the way of the Dodo, at least for now. Despite rumors to the contrary, no effort was made during yesterday’s session to revive this terrible and galling measure.

In a rarely seen herculean effort, environmental activists, community organizers, and progressive movement leaders came together to defeat the big bad A&B in a true David-vs-Goliath fashion. Working together to share facts, educate Senators, and push back against one of the most powerful corporations in Hawaii, this collection of individuals did what many thought would have been impossible.

I consider the role I played in this fight as a minor one. But I am proud to have been a part and help as I could. I am so impressed with the passion and commitment the advocates had for this issue. They. We’re. Tireless.

And they won the day.

In a word, elections.

Sadly and frustratingly, too many of our elected officials have stopped representing the people. In service to their reelections, they chase corporate and development dollars leaving the rest of us to fend for ourselves. Far too often this means fleeing the state for cheaper and easier pastures.

The time has long since passed when we need to stand up and challenge those long-serving Democrats who have forgotten where their allegiances should lie.

Efforts are beginning to develop a strategy for the 2020 primaries. Identifying viable and hard-working candidates who share a vision of Hawaii for its working people, not for those in luxury high-rise ivory towers.

If you want a better Hawaii for you, your family, your children and all the under-represented in our island home, join me. Join us.

Donate to the Initiative for a Pono Hawaii PAC. There is no online donation system yet, but we hope soon to have that remedied. In the meantime, you can send checks to:

It’s time to take the fight to them.