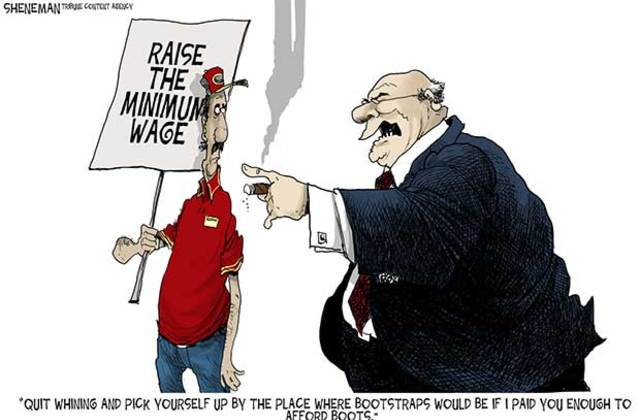 Friends Come in All Shapes, Sizes, and Opposing Political Ideas

Years ago I worked for a small insurance agency. The owner and agent is a long-time capitalist.

This former employer and friend of mine loved to talk politics with me. And I with him. He believes when the government gets too involved, when there are too many regulations, too many taxes, it means less freedom.

I staunchly disagreed with him and there were times when our debates would go on for hours. Much to the chagrin of his wife and business partner, who would often scold both of us, “stop talking politics and get back to work!” I adore both of them.

Entrepreneurs Don’t Necessarily Have More to Gain or Lose

The reason I am starting with this story is because whenever I think about labor issues like a Living Wage, or Paid Family Leave, etc. I am reminded about something he said to me once.

Talking about employees versus business owners, he would say owners always take a lot of risk when starting their own business. His implication was that owners, more than employees, shoulder more risk and so deserve greater reward when the business succeeds. I would ask him how well he thought his business would be doing if he didn’t have me there. Would he be as successful?

And I would ask him what he thought would happen to me if his business closed. Being successful, he’s managed to build up savings and equity over the years so that if the business took a turn and he was forced to close down, he’d have a safety net on which to fall back. I, on the other hand, being both young and not making a lot of money, had no savings. No safety net. I would have to rely on Unemployment Insurance to fill the gap until I found another job.

The Hawaii State Legislature is Business-Focused, Not Worker-Focused

Over many years working on increasing the Minimum Wage, I’ve heard primarily one concern from opponents. One reason to oppose any increase in the Minimum Wage; businesses would suffer. Unemployment would increase.

Despite a preponderance of evidence to the contrary, these talking points persist. When policy-makers worry more about optics and politics than facts and figures, there’s a problem.

Years and years of research tells us increasing the Minimum Wage doesn’t cause an increase in unemployment. And it doesn’t necessarily lead to business closures. Some of this research is beginning to be done on $15 with similar outcomes….

Despite the high cost of living in Hawaii. Despite the fact that people are moving away from Hawaii for better chances at a good life. Our policymakers have done little-to-nothing to address this. Their solution to these problems is to reduce regulation, lower taxes for businesses, and to try to incentivize new industries.

But none of this addresses the income gap in Hawaii, nor does any of it address the fact that too many minimum wage workers are living in poverty. Literally. No one who works full-time should be in poverty. No one.

The neoliberal democratic majority at the Legislature worries about how businesses are faring. They worry about the burden of GET on businesses. And they worry about regulatory burdens. Regularly they decry the plight of businesses in Hawaii and twist themselves into knots trying to do more.

But where’s the knot-twisting when it comes to the plight of working people?

For the now-defunct Superferry as well as Honolulu’s HART train wreck (pun intended), Legislators went to extraordinary lengths to raise funds and side-step regulatory necessities. It happened so fast you’d think the fate of the State depended on them.

But what about the fate of people who are one bad day, one accident, one missed paycheck away from living on the street? Skyrocketing unemployment, they scream! Small businesses will suffer, they exclaim!

On Minimum Wage, Paid Family Leave, Affordable Housing… the list goes on and on, our neoliberal legislators are convinced, despite mountains of evidence, that businesses are what drive the economy. In fact, consumer spending is one of the biggest economic indicators there is; when workers earn more money, they spend more.

When the working-class thrives, we all thrive. Its long-past time legislators remembered that fact and made working people their priority.

*This piece was previously published by Civil Beat. I also wrote early last year about the minimum wage fight here.